TOPColumn on MatsuyamaTry the Two Kinds of Sea Bream with Rice

Try the Two Kinds of Sea Bream with Rice

Taimeshi (“sea bream rice”) is one of the representative dishes of Ehime Prefecture. It comes in two different styles—the Hōjō taimeshi, which is from the Chūyo region in central Ehime, and the Uwajima taimeshi of the Nanyo (southern) region of the prefecture. In the central (Chūyo) and eastern (Tōyo) regions, whole grilled sea breams are boldly thrown into and cooked with rice, while in the southern (Nanyo) region, sea bream in sashimi form is placed atop warm steamed rice along with a special sauce mixed together with a raw egg, and condiments like sesame seeds and chopped green onions. These two variations of taimeshi have long been well-loved by many people, from local residents to tourists. In the heart of Matsuyama City and in the shopping district of Dōgo Onsen, there are many restaurants where you can try either of these dishes and compare the different tastes. The two kinds of taimeshi are popular cuisines special to Ehime, which boasts one of the largest productions of sea bream in the country. Here, we invite you to find your favorite taimeshi.

Hōjō taimeshi, the local cuisine of the Hōjō region of Matsuyama City, is made by cooking a whole sea bream with rice 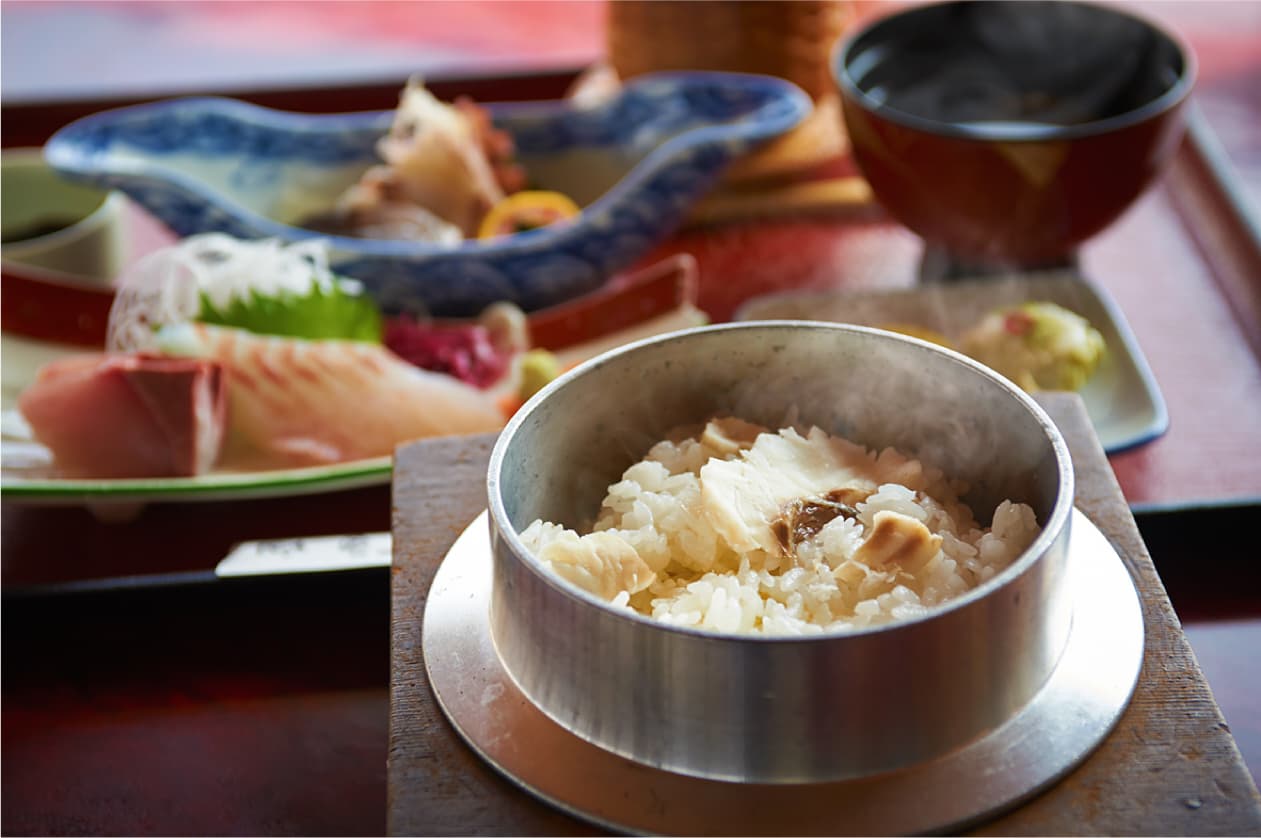 Hōjō taimeshi has long existed as the local cuisine of the Hōjō district, located in the northern area of Matsuyama City. Its main feature is that it is made by cooking an entire fish together with rice. It contains no vegetables like burdock root or carrots or fried tōfu commonly used for this type of dish, but rather, it is made only with seabream and dashi-kombu (kelp used to make broth). Because of its simplicity, this cooking method allows the full flavors of the fresh ingredients to come through and be enjoyed.
After the ingredients are slowly cooked in an iron or earthen pot, the dish is eaten by breaking apart the fish and mixing it with the rice. The refined tastes of the fluffy rice imbued with the umami flavors of the seabream and kelp, as well as the broth that comes from the sea bream, are simply superb.
Hōjō taimeshi can be enjoyed at many places in the Hōjō region (and in the central part of Matsuyama), some of which are long-standing restaurants with histories of 150 years or more. 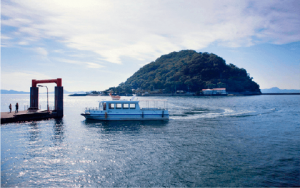 According to Nihon Shoki (The Chronicles of Japan), Empress Jingū was on her way to invade Korea, and when she stopped the ship at Kashima to pray for victory at the Kashima Shrine, the fishermen of the Kazahaya-ura Bay presented her with a fresh sea bream caught at a nearby sea. The empress graciously accepted the fish as an auspicious sign of what is to come. And when the fish was then cooked with rice and offered to her, she is said to have expressed great joy and praised the deliciousness.
This is the story that has been passed down as the origin of Hōjō taimeshi, now known as the specialty dish of the Hōjō region. As such, this dish has long been eaten on celebratory occasions. 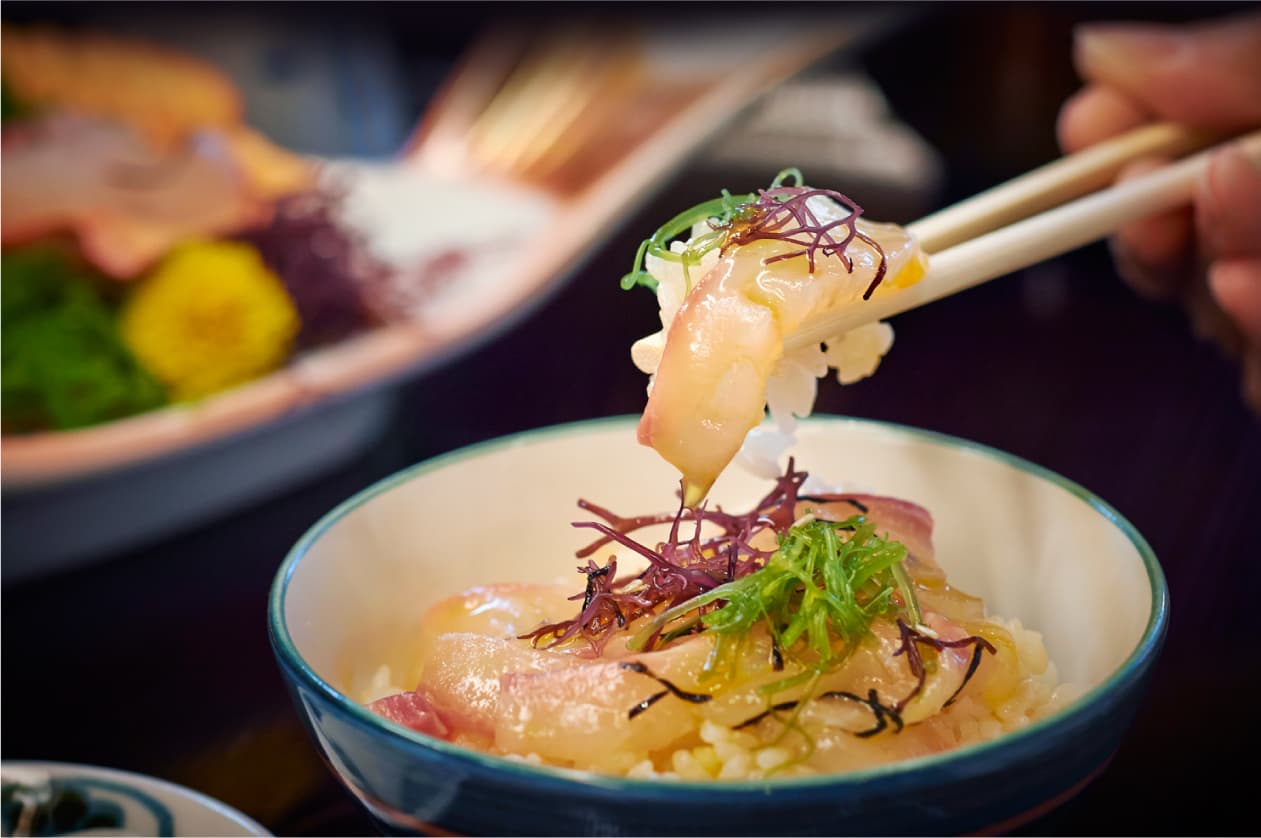 Soak the seabream sashimi and condiments in a special sauce that contains a raw egg. Place some rice in a bowl, then pour the sea bream with sauce on top. This is the special way a taimeshi is eaten in the Nanyo region. The seabream with just the perfect amount of fattiness and the fresh, springy texture, combined with the rice mixed with the sauce, is quite exquisite. You won’t be able to resist helping yourself to seconds and thirds.

The origins of Uwajima taimeshi

The origins of Uwajima taimeshi are dishes that were called kaizoku-meshi (“pirate food”) or ryoshi-meshi (“fishermen’s food”) which were often eaten by the Iyosui-gun, a group of pirates that ruled the Seto Inland Sea during medieval Japan. It is said to have started when the seafarers were partying atop a ship, eating sashimi and drinking sake from rice bowls, after which they placed rice in the bowl that still contained some sake, and ate it with sashimi soaked in ample soy sauce. It was a dish created in order to bring out the deliciousness of the ingredients without requiring a lot of prep time.