TOPColumn on MatsuyamaIntroducing a brand new onsen culture – The birth of a bathhouse with an Asuka period concept!!

Introducing a brand new onsen culture – The birth of a bathhouse with an Asuka period concept!!

The Asuka-no-yu Onsen is a hot spring facility providing a new onsen culture to stimulate you senses that you can only experience in Matsuyama, at Dōgo. Here, legends and stories of ancient Dōgo Onsen unfold in a collaboration of creations and theatrics displaying Ehime’s traditional crafts and leading arts beyond the bathing areas, throughout the venue. Matsuyama’s city flower tsubaki (camellia) comes to life in the bathhouse courtyard built to resemble the architecture of the Asuka period with remnants of legendary visitations by Prince Shōtoku and Empress Saimei. Visitors are also treated to a reproduction of Tsubaki-no-Mori in the image that Prince Shōtoku recited.

Entrance ~ the way into Ancient Dōgo ~ 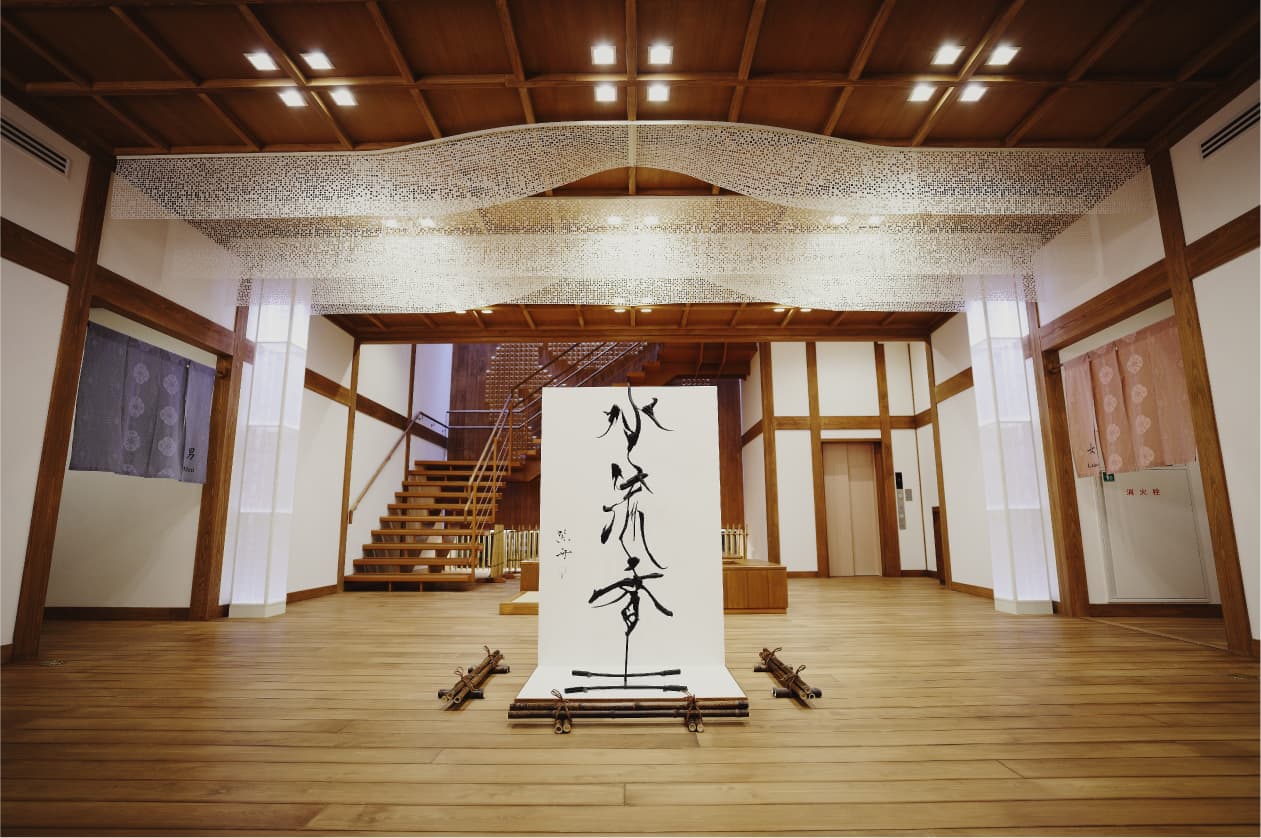 The huge woodcut mural decorating the entrance is Dōgo Onsen’s yudama icon, carved with wakugi, traditional Japanese nails known to last thousands of years, like the ones used when rebuilding the World Heritage Yakushi-ji Temple West Tower and the corridors.
The shades in the lobby are in the image of a temple gate. A sacred atmosphere is created, using the delicate texture of washi paper. Zeolite Washi paper, known to cleanse the air invites you into the hot bath, to soothe your soul. 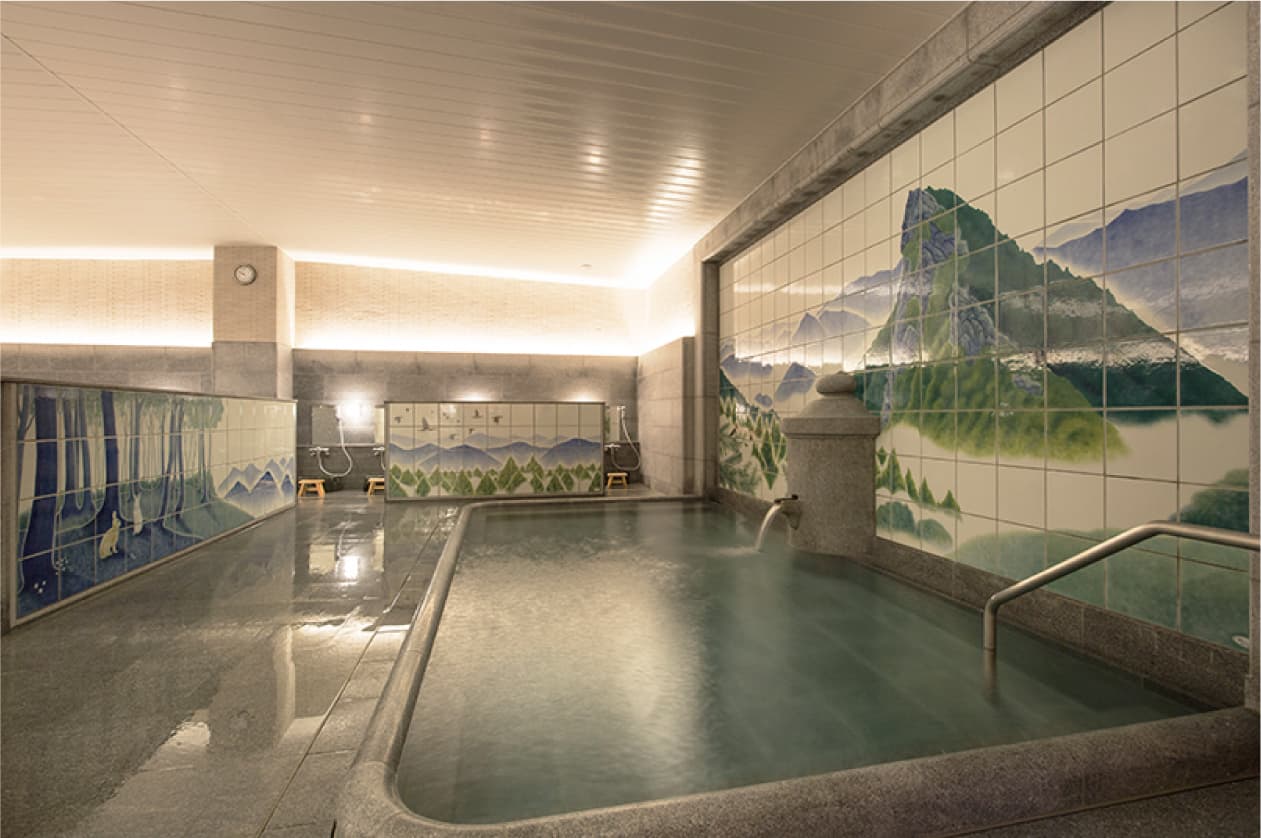 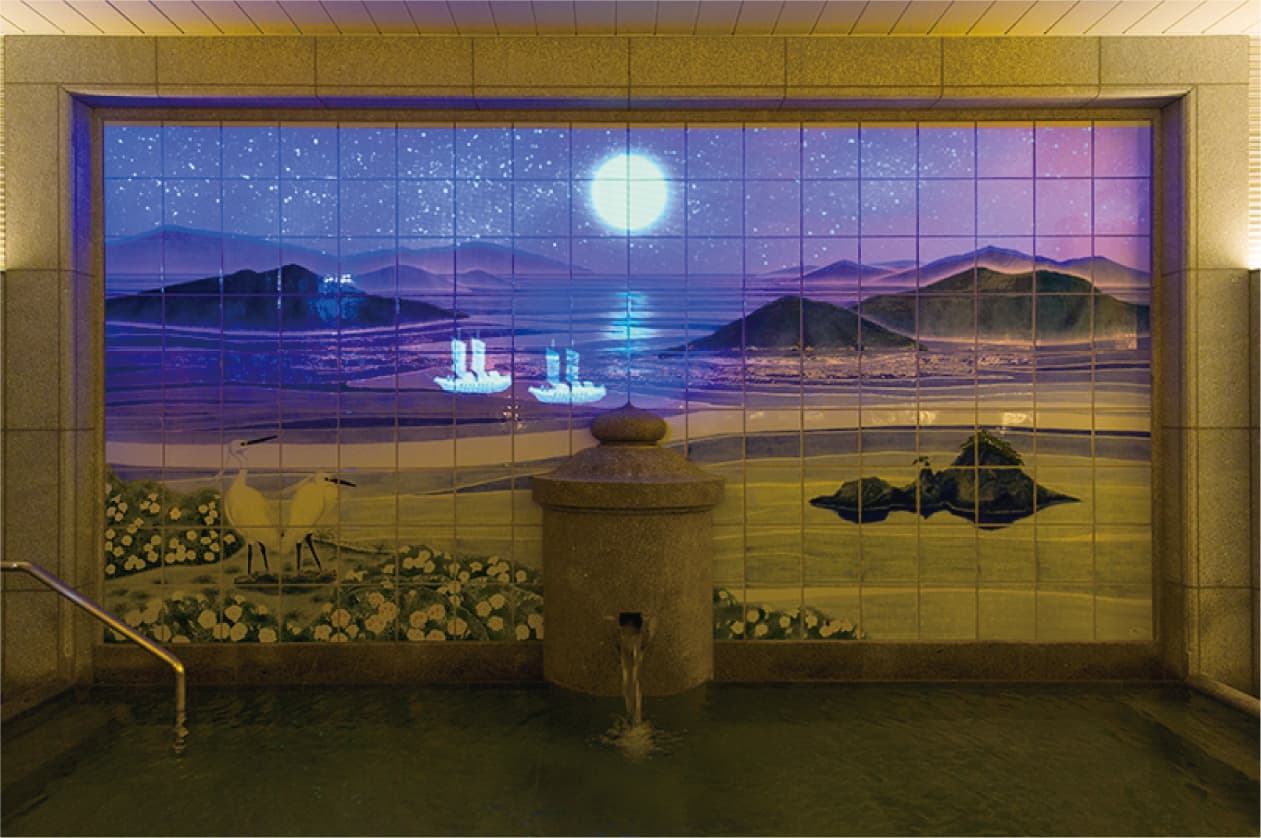 The national designated traditional craft Tobe Ware porcelain mural illustrate scenes of waka poetry about Dōgo Onsen. The wall in the men’s bathing room depicts Ishizuchi, the highest peak of Iyo. The wall in the women’s bathing room depicts the sea of Nikitatsu (the Seto Inland Sea). Here, you can soak in the world of waka. The open-air bath sets you amongst majestic mountains and open seas, with a wall of Hime Hinoki cypress. Lanterns with Kikuma-gawara roof tiles, known for their use on the Matsuyama Castle, Dōgo Onsen, and the Kyōto Imperial Palace, will take you into the world of Manyo, the 8th century anthology of Japanese poetry. 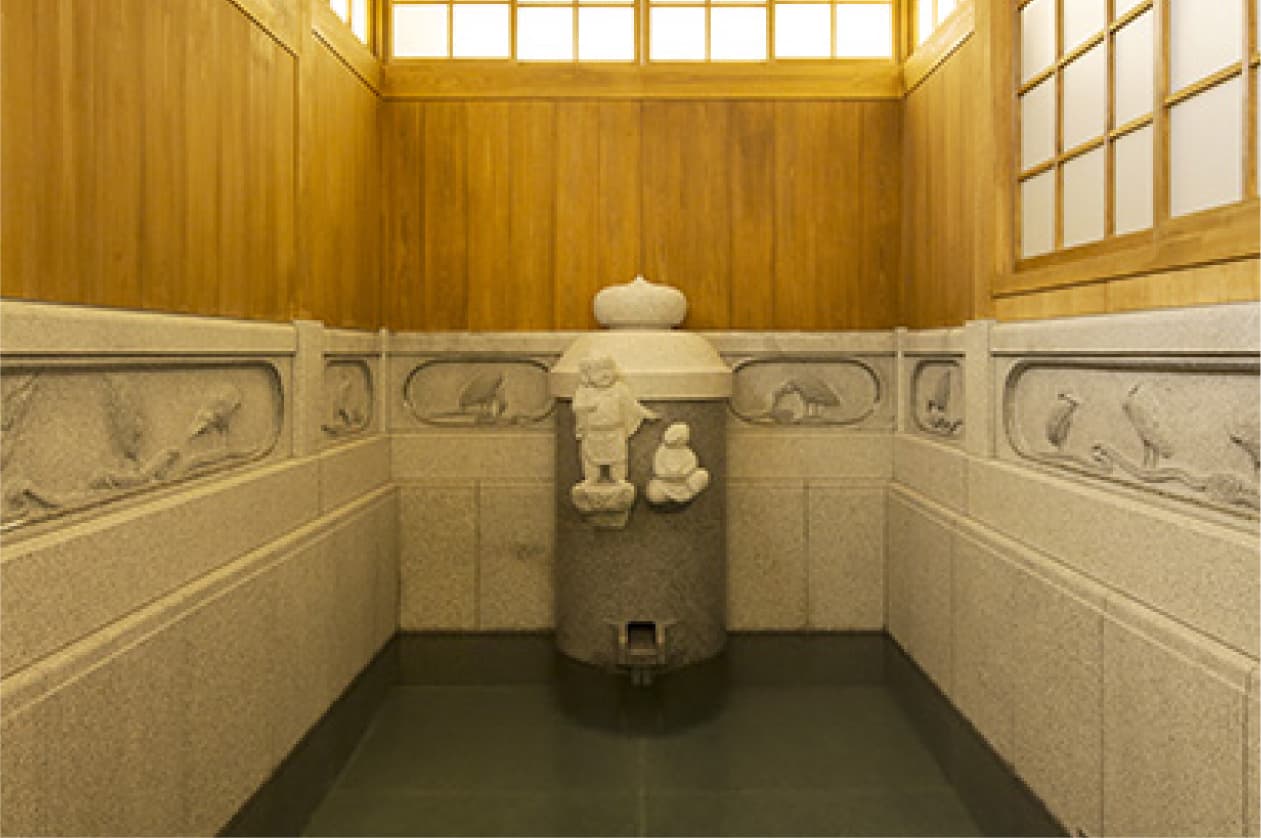 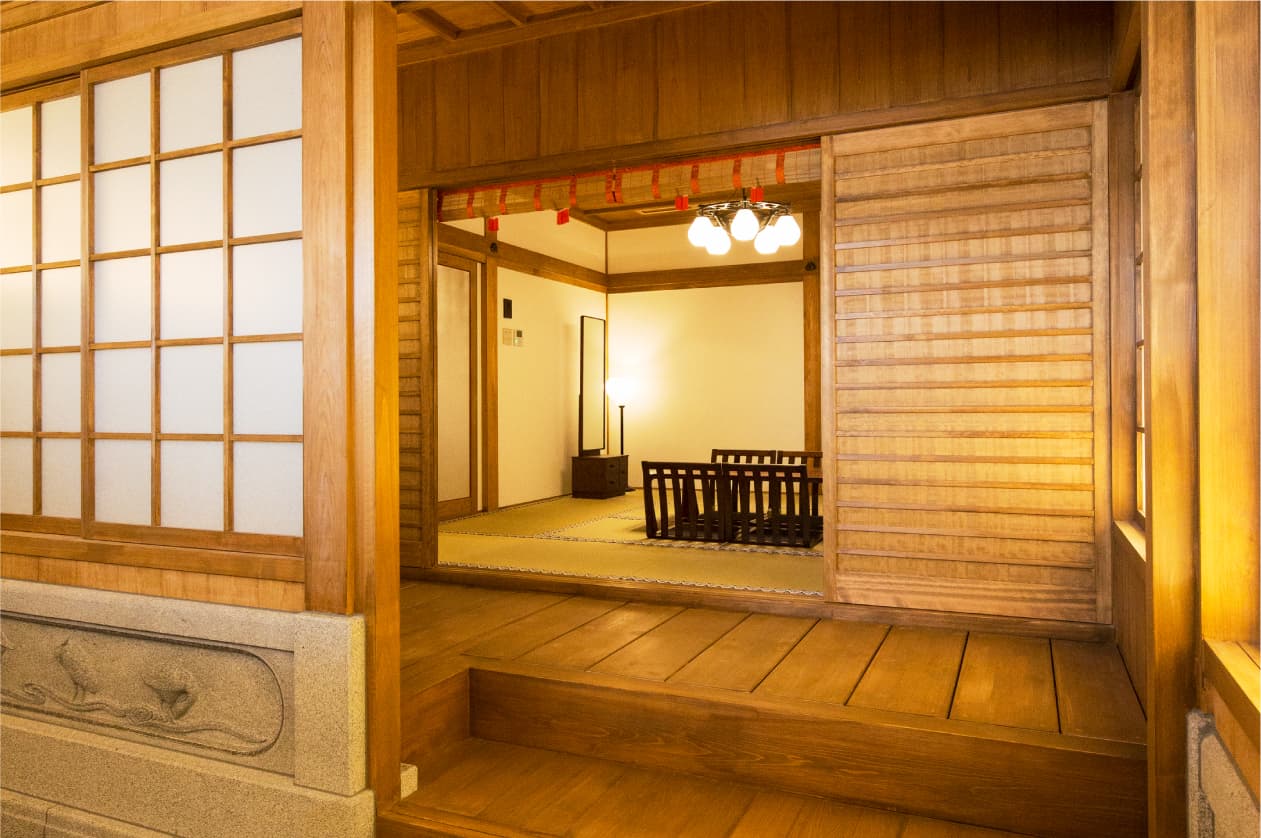 This special bathing room is a replica of the Yūshinden, the private bathing room made exclusively for the imperial family in the main building. The lace curtain-like su characterized by Iyosu fine bamboo screens gently separates the bathing room and the resting room. 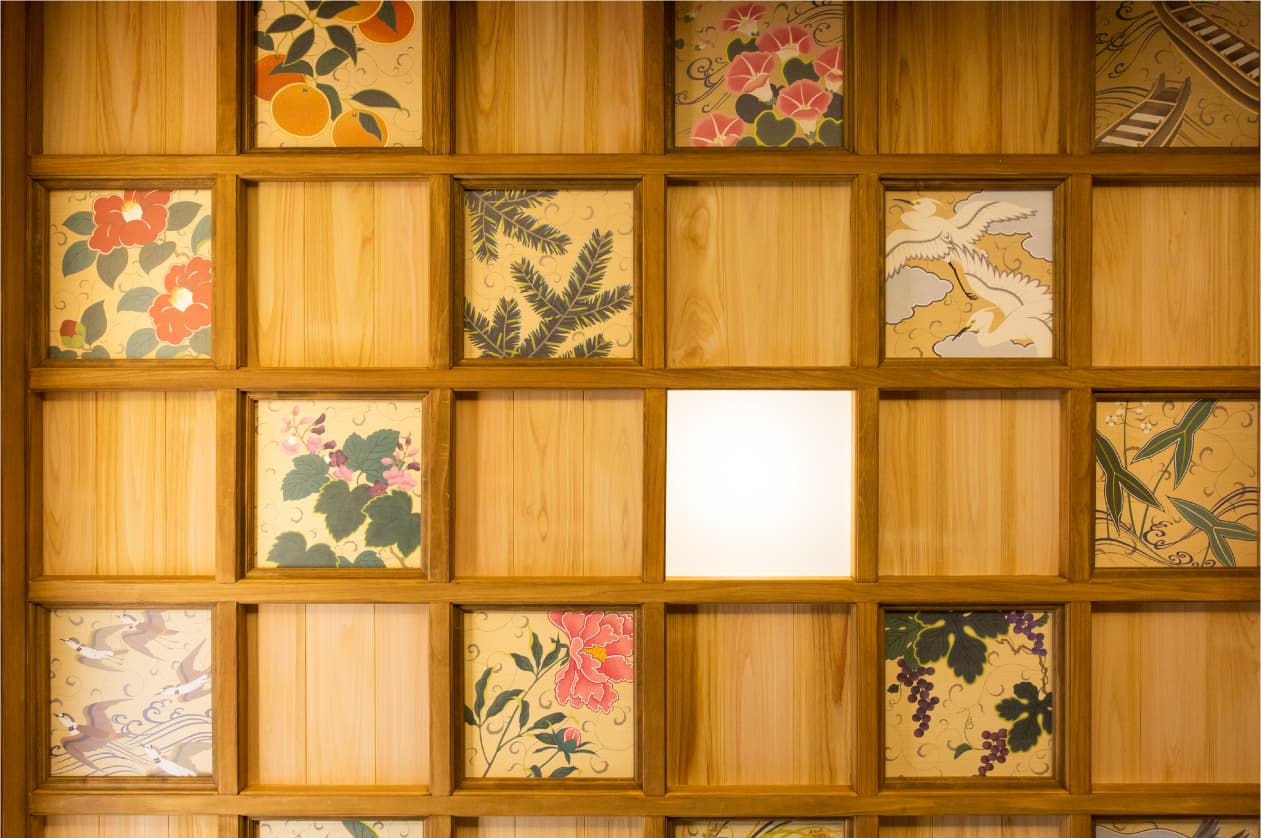 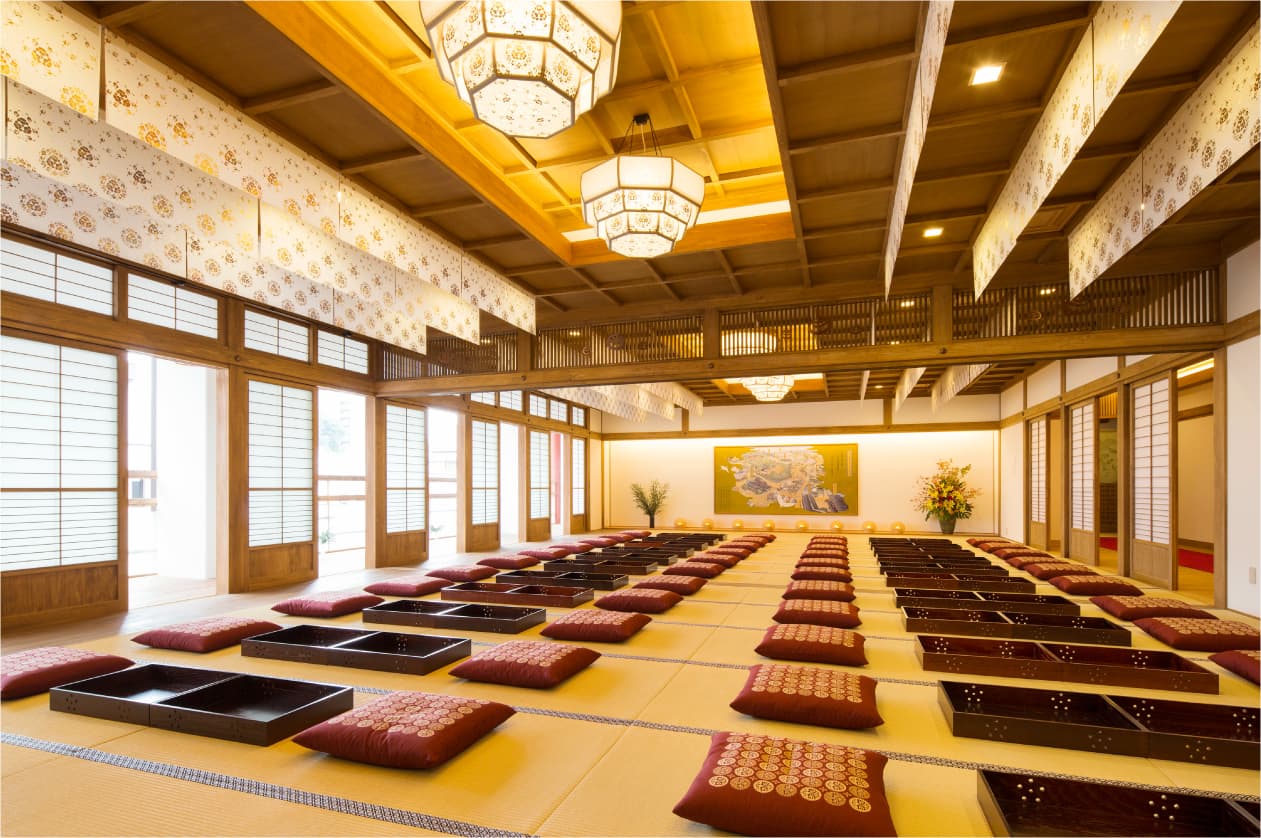 The land of longevity is depicted in the large resting hall, with hanging shades and lampshades illustrating Prince Shōtoku’s spiritually elegant worldview in his expression of Dōgo Onsen. Gilding Washi paper, collaboration between the national designated traditional craft Ōzu-washi and the gilding process using metal foil, is used on the hanging shades. The gentle soft expression of the washi and the presence that the gilding foil releases create a unique expression. 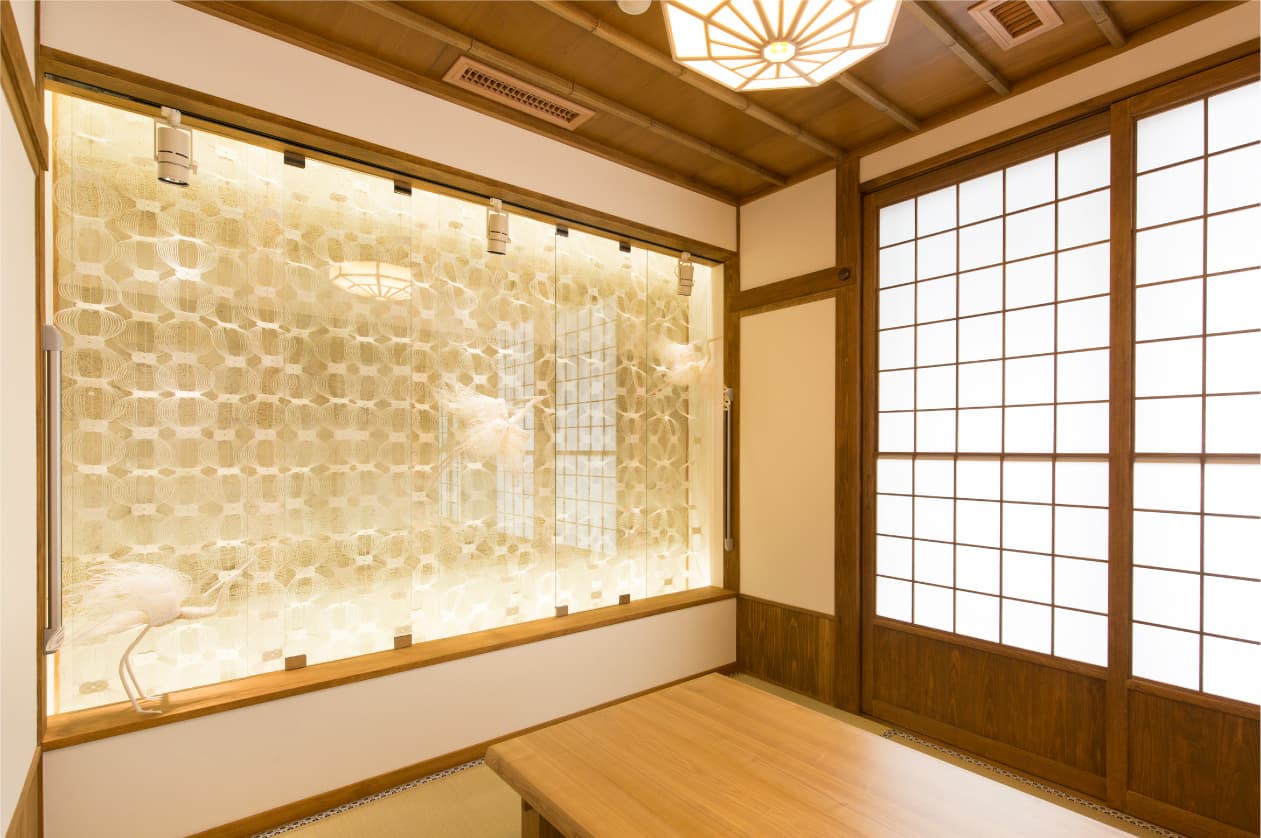 The technique of Iyo-Mizuhiki ceremonial paper cords is used to illustrate the legend of the injured egret that got well and took flight after soaking its legs in the Dōgo hot springs. Take in the design of the hot water patterns made by the elegant paper cords. 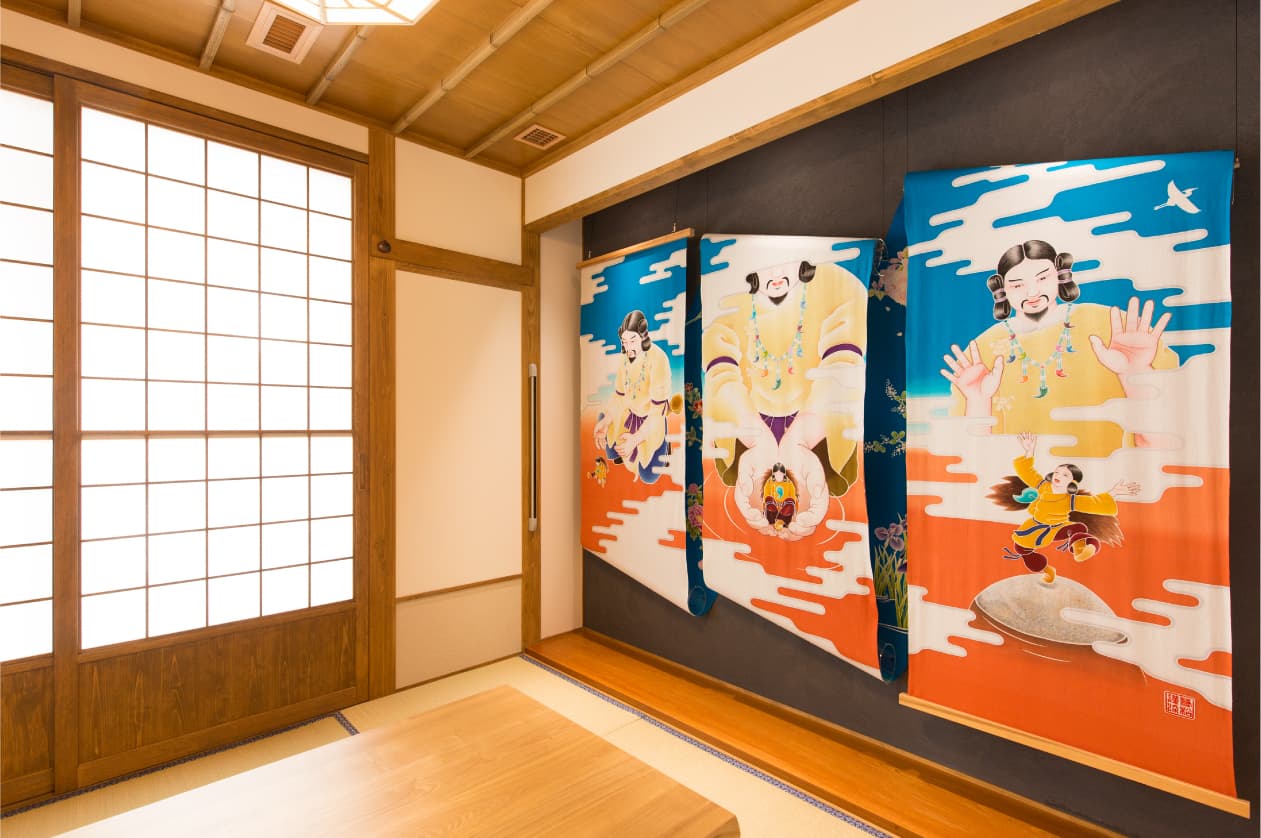 The mural on the wall in this room is based on the Tamanoishi rock legend of Ōkuninushi-no-mikoto and Sukuna Bikona-no-mikoto. It is drawn using the Tsutsugaki paste-resist dyeing technique, filling a rice-paper cylinder with glutinous rice and paste-resistant dye, then carefully squeezing it out by hand. 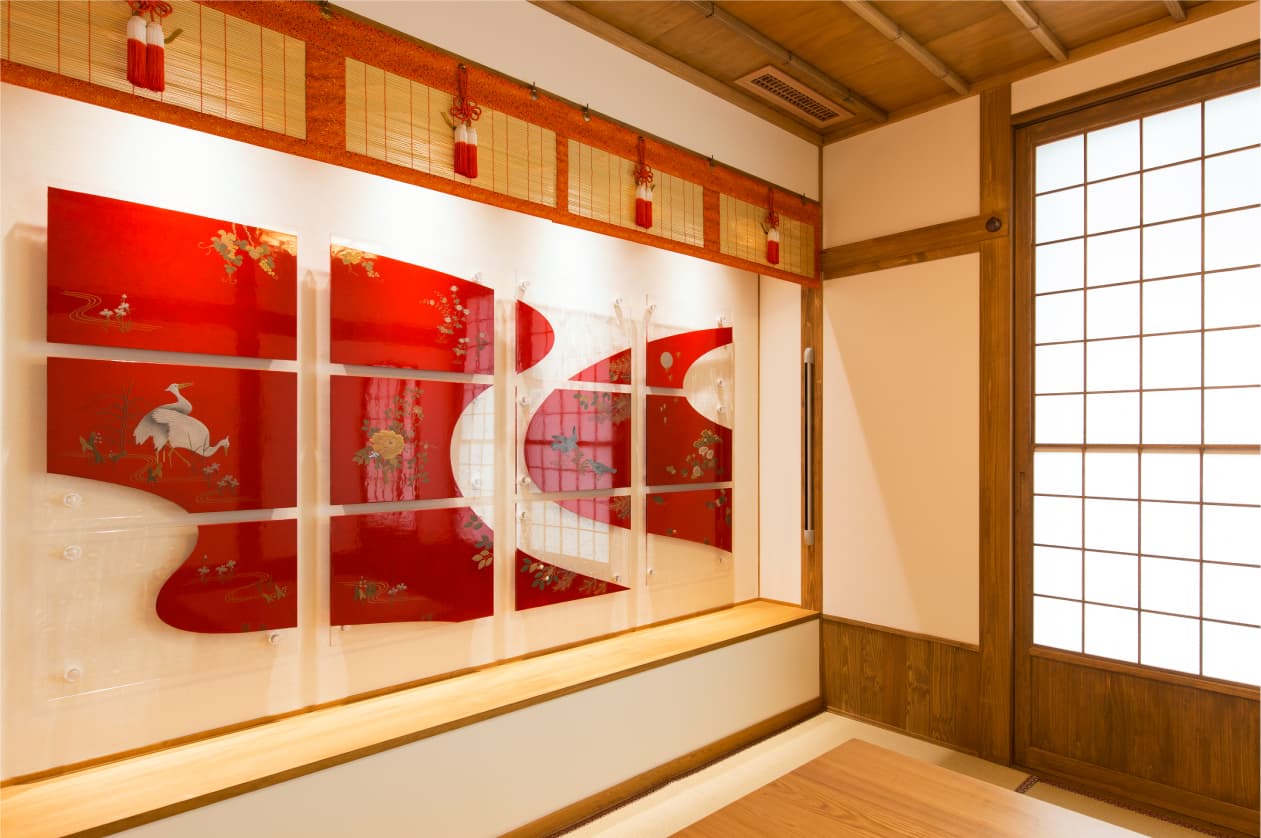 The theme of this room is the procession of the imperial court from the Asuka to Heian periods and what it must have been like when they made their journey to Dōgo Onsen. The scenes are depicted using the Sakurai Lacquerware technique of maki-e. Notice the works of unprecedented size and new spatial expression. 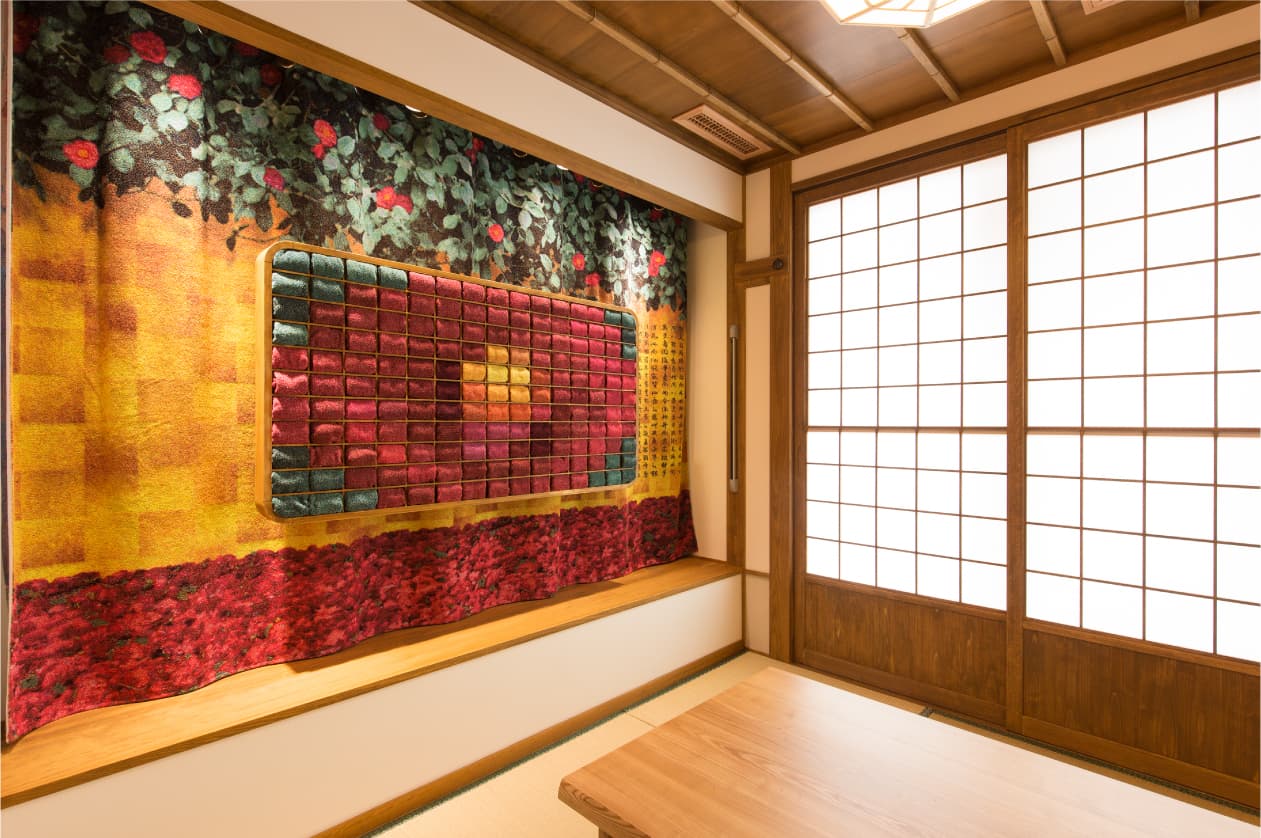 This room depicts Tsubaki no Mori (Camellia Forest), said to have been an image left by Prince Shōtoku on the Inscription at Yunooka (Hot Spring Hill) when he visited Dōgo Onsen. Today, this camellia is expressed on Imabari Towels, boasting the largest towel production in Japan. 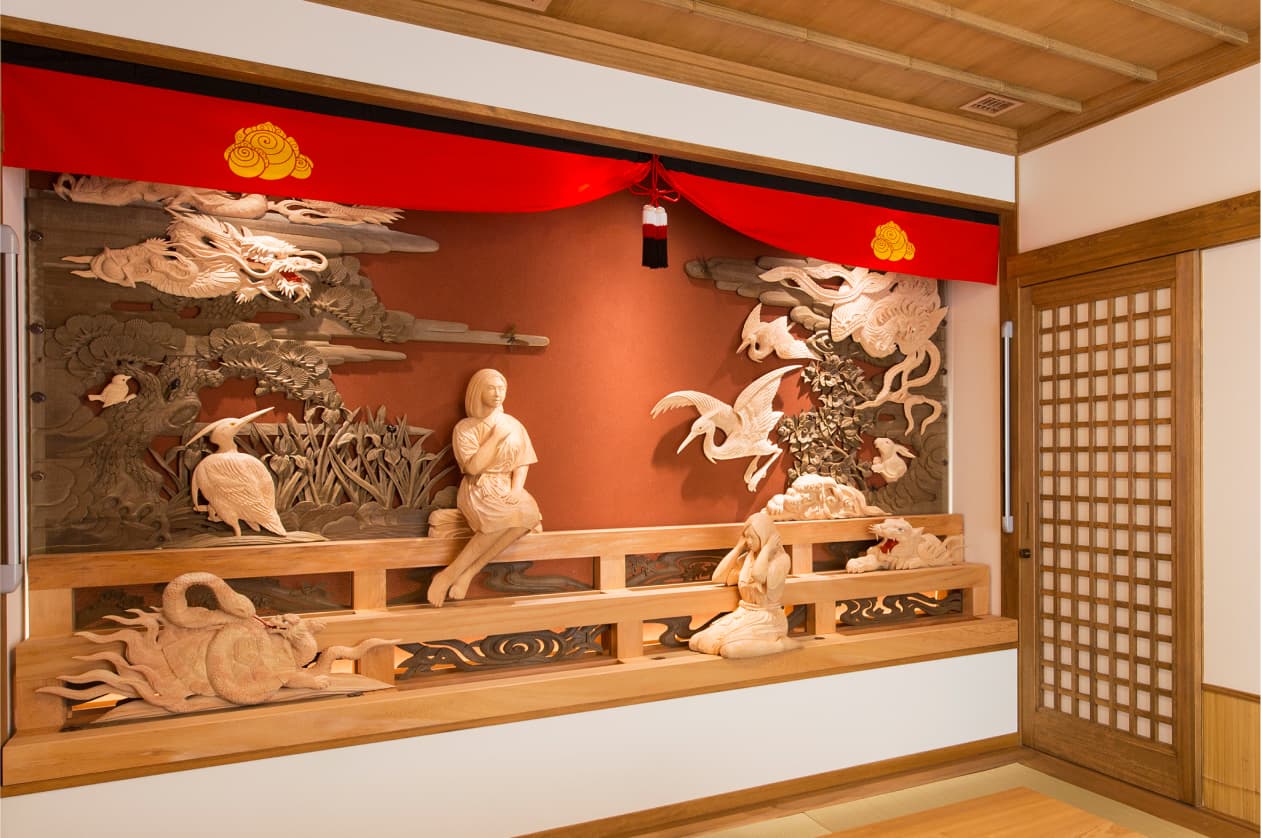 With the technique of Saijō Danjiri Sculpture using 100 different chisels and gravers, this room illustrates the hustle and bustle of Dōgo Onsen as depicted in the Tales of Genji, in the “Bathtubs of Iyo”.