TOPColumn on MatsuyamaA famous castle in Japan. What is the must-see charm of “Matsuyama Castle” for castle lovers?

A famous castle in Japan. What is the must-see charm of “Matsuyama Castle” for castle lovers?

Speaking of Matsuyama's representative tourist attractions, Matsuyama Castle has an extant castle tower (main donjon) built before the Edo Period (1603〜1868). Only 12 such castle towers remain in Japan! Matsuyama Castle is familiar as one of the most famous cherry blossom spots and scenic beauty spots in the prefecture, and it is a structure with great historical value which has many attractive assets as a castle, such as having received a 2-star Michelin rating. Let us introduce the charms of Matsuyama Castle!

The charms of Matsuyama Castle which has a history of nearly 400 years!

Don’t miss the spectacular view overlooking the entire city of Matsuyama from the beautiful castle tower built on Mt. Katsuyama! 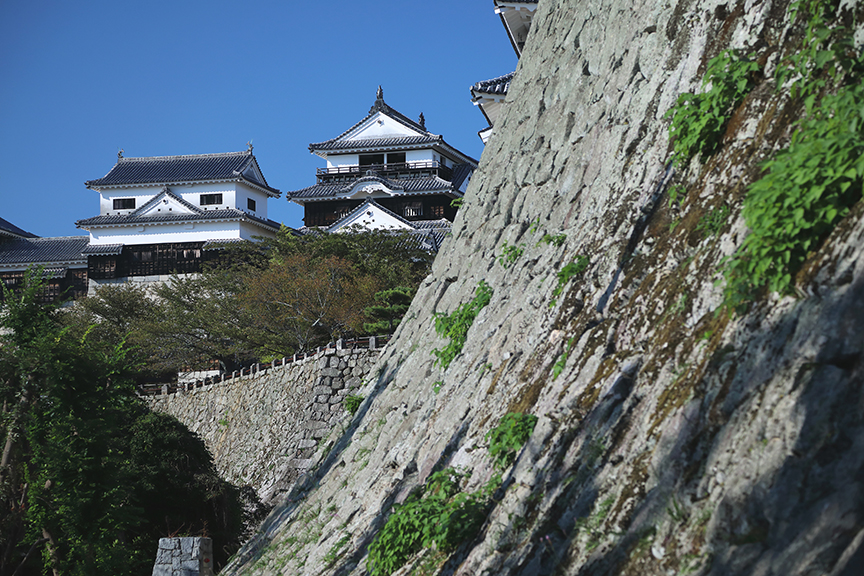 The castle tower of Matsuyama Castle, which stands proudly on the mountain overlooking the city of Matsuyama, has a strong presence and is quite attractive. The elaborately built donjon becomes more powerful the closer you look at it. 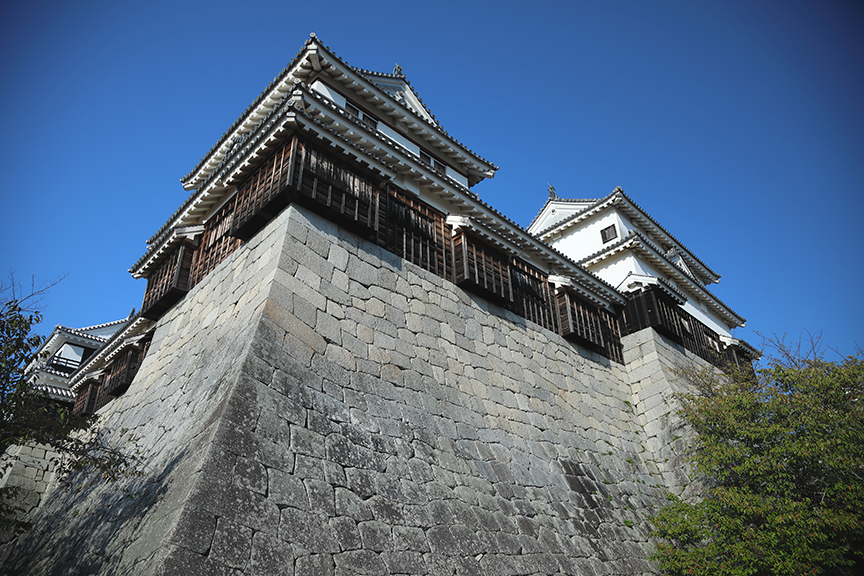 When the weather is nice, you can enjoy a magnificent panorama and can see Mt. Ishizuchi, the highest peak in western Japan, in addition to Hiroshima Prefecture which is located across the sea.

If you’d like to enjoy the view of the Matsuyama Plain and the Seto Inland Sea with a 360-degree panoramic view, we recommend the top floor of the castle tower!

Not only the daytime view from Matsuyama Castle, but also the night view is a recommended point! Matsuyama Castle, which is lit up at night, appears to be floating in the sky and is unusually charming. The view of the city from the castle tower square (Honmaru) at an altitude of 132m, which is open until 21:00, is also superb. 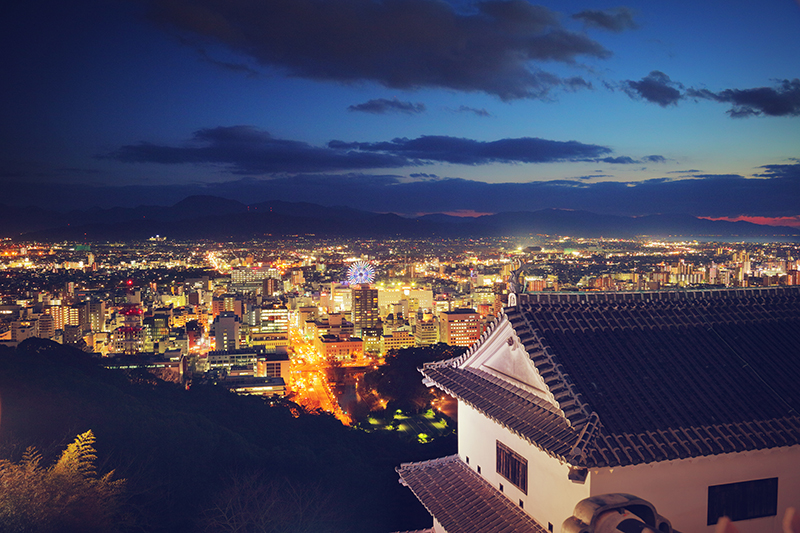 What is the charm of a historical castle designated as an Important Cultural Property? 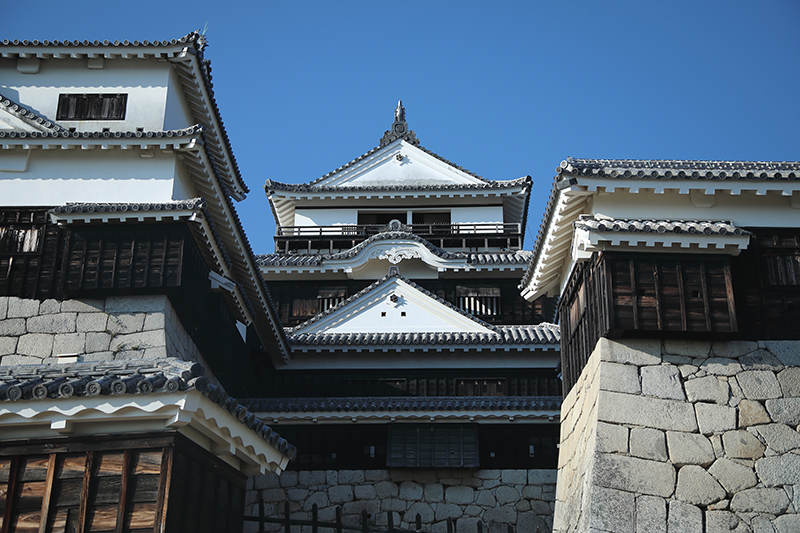 The battle of Shizugatake had a great influence on the history of Japan. Yoshiaki Kato, who played an active part in this battle, was the first feudal lord of the Iyo-Matsuyama Feudal Clan (the present day Matsuyama region). It was this Matsuyama Castle that he began to build! The castle mascot character “Yoshiaki-kun” was named after Yoshiaki Kato.

Matsuyama Castle is the last extant, complete castle structure of those built in the Edo Period, and the large main keep still exists. Castle architecture is a symbol of Japanese culture during the Azuchi-Momoyama Period (1573〜1603), and refers to an architectural style that was built militarily to prevent invasion by enemies, yet has a decorative design.

In addition, there are four types of castle towers: independent type, compound type, connected type, and complex or multiple-wing type. Of these, only two existing castles are classified as complex, Himeji Castle and Matsuyama Castle! Even from the standpoint of the structure of the castle tower, Matsuyama Castle is a valuable castle.

Castle Trivia “What is the difference in the form of castle towers? 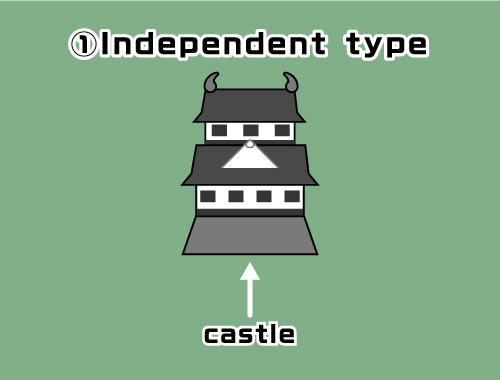 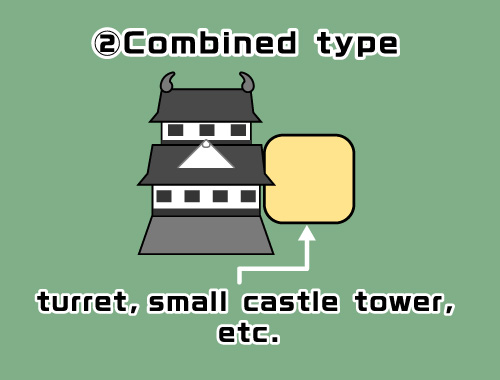 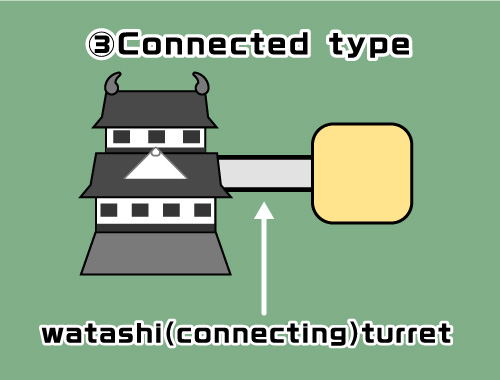 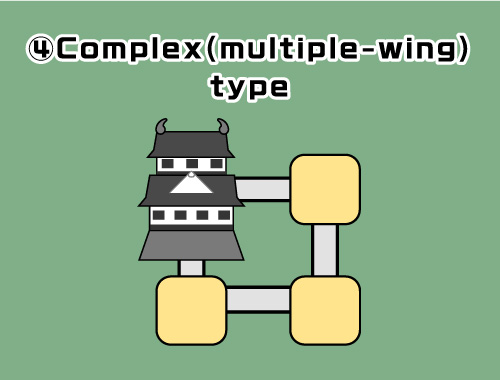 Introducing “How to Enjoy” Matsuyama Castle!

You can use the lift to feel a refreshing breeze, or you can easily climb with the ropeway! Various means of climbing to the Castle!

There are various ways to climb to Matsuyama Castle. Among them, the lift and ropeway are recommended because you can enjoy the view of the city and the rich nature to a full 360 degrees! At the lift, you can go slowly and take in the scenery surrounded by the greenery of the trees. Great for climbing while feeling the refreshing breeze! Also, if you use the ropeway, you can go to the main square in no time. Enjoy the easy climbing to the castle while delighting in the scenery which changes depending on the time of day! A relaxing time in the large Honmaru Square!

After starting the climb to the Castle and passing through the Taiko-mon Gate and turrets built as a defense of the Castle, you will be greeted by the large Honmaru Square. Honmaru Square has a fantastic view and is very popular as a famous place for cherry blossom viewing in spring. You can also enjoy delicious sweets at the shops there. 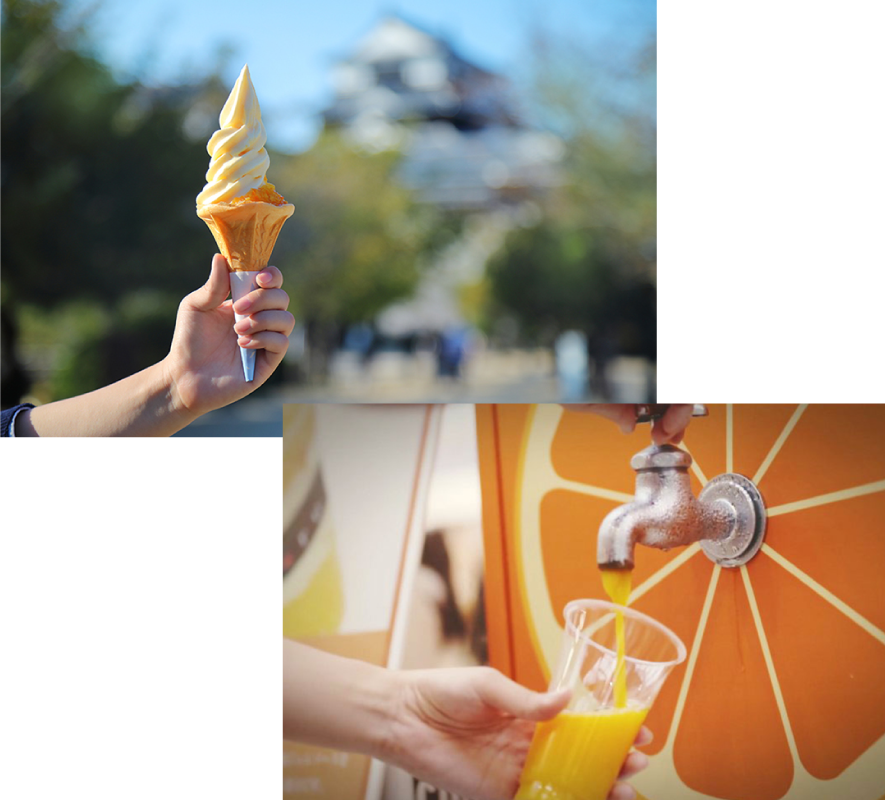 In addition, you can experience the “orange juice faucet”! Spend a relaxing time seated on a bench overlooking the city!

Castle Trivia “The Secret of the Honmaru Well in the Square”

Yoshiaki:  ” In those days, there were times when many soldiers died due to lack of water during the battle.

Lord Kato who had experienced this, thought carefully about water when he built Matsuyama Castle. “ 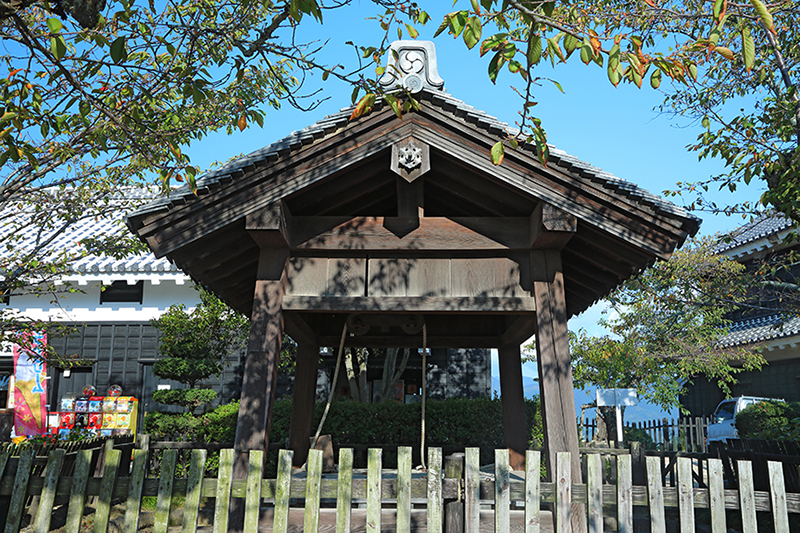 The area around Matsuyama Castle is perfect for walking! A walk while feeling its history is also attractive ♪

One of the recommended points is not only to climb Matsuyama Castle but also to walk around Matsuyama Castle! If you walk around the outer circumference of Shiroyama Park at the foot of Matsuyama Castle, you can look up at the castle from various angles of the 360 degrees! Since there are few slopes, anyone can easily enjoy walking. In addition to touring Matsuyama Castle, there is no doubt that you can enjoy it even more “Ninomaru Histrical Garden”,which reproduces the layout of the residence of the Matsuyama Feudal Lord, as a part of the course! There are also coin lockers (charged) at the ropeway Shinonome-guchi Station building, so you can leave your luggage there and climb the castle more easily. Find the walking course that is suitable for you.

A Humorous Secret of Matsuyama Castle,

A part of the back of the clapboards is displayed in the castle tower of Matsuyama Castle. On the clapboards are scribbles which were likely made by a castle carpenter! 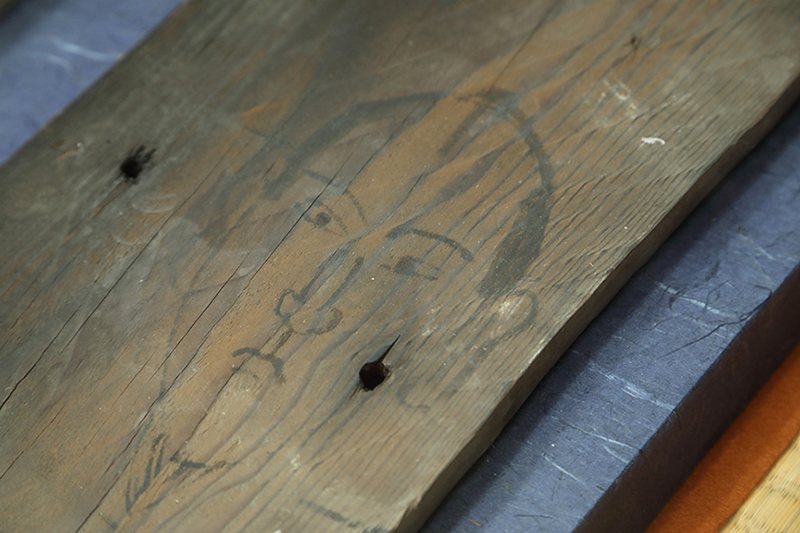 They were hidden because they were pasted over when the walls of the castle were built, but they were discovered during renovation work of the castle tower which began in 2004. You might think, “Isn’t it just a scribble?”, but in fact, it is presumed that this is a portrait of an official person in the post. It probably would have been very scary in those times of a strict social status society to scribble a portrait of a samurai on a castle board. It would have been quite a rude act deserving to be punished very severely if exposed. How did a castle carpenter make this graffiti? That’s also interesting to contemplate!

Castle Trivia “What is a really strong weapon?”

So what do you think? 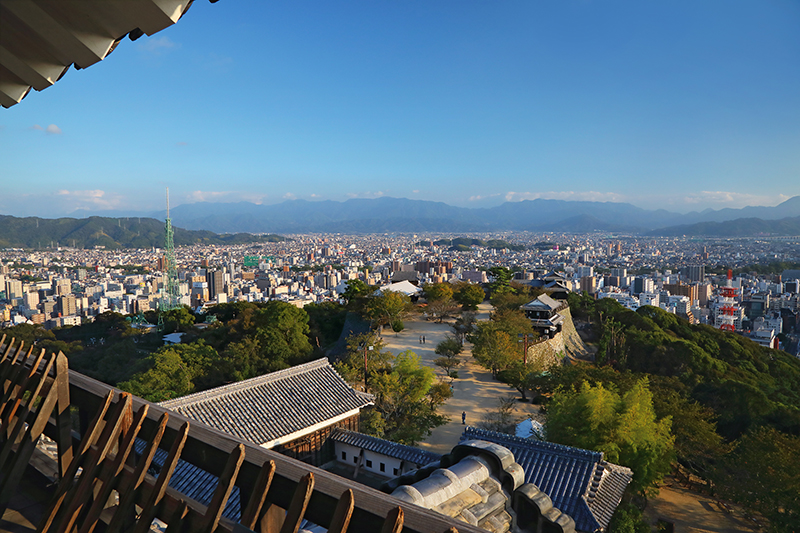 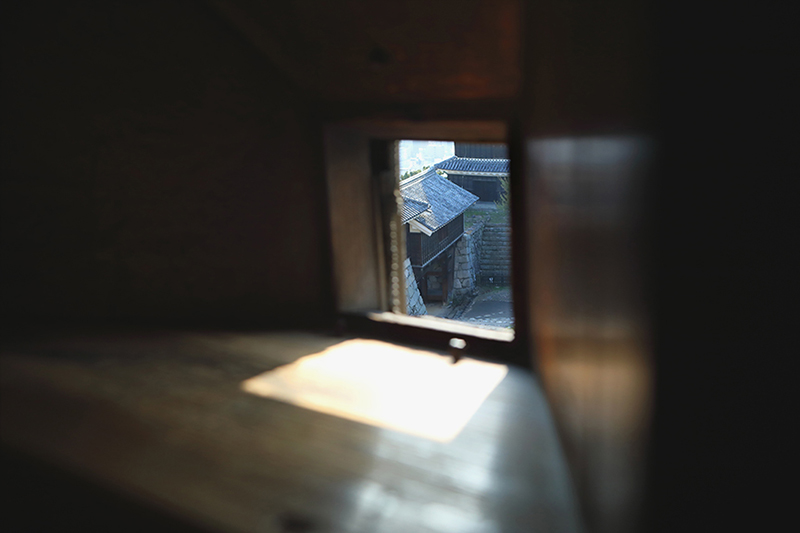 Well, here is the final quiz!

From what vantage point is this photo taken?

Come and see the rest of the secrets of Matsuyama Castle for yourself!