TOPColumn on MatsuyamaMitsuhama-yaki, filled with the delicious flavor of broth, was born in a port town

Mitsuhama-yaki, filled with the delicious flavor of broth, was born in a port town

A delightful local specialty only known by those in the know. Matsuyama’s soul food is taste of nostalgia.

Keys to its deliciousness is kezuri-ko and chikuwa!
And beef fat is added for an even richer flavor!

The dish contains kezuri-ko (dried fish powder) and chikuwa (tube-shaped fish cake). The chikuwa are usually pink and white in color. As they produce the perfect amount of chewiness and broth as they are cooked, adding depth to the overall flavor, it is an essential ingredient used by every restaurant.
Another key ingredient is beef fat. It melts and mixes in just the right way with the batter and vegetables, creating a sweet and profoundly rich flavor. 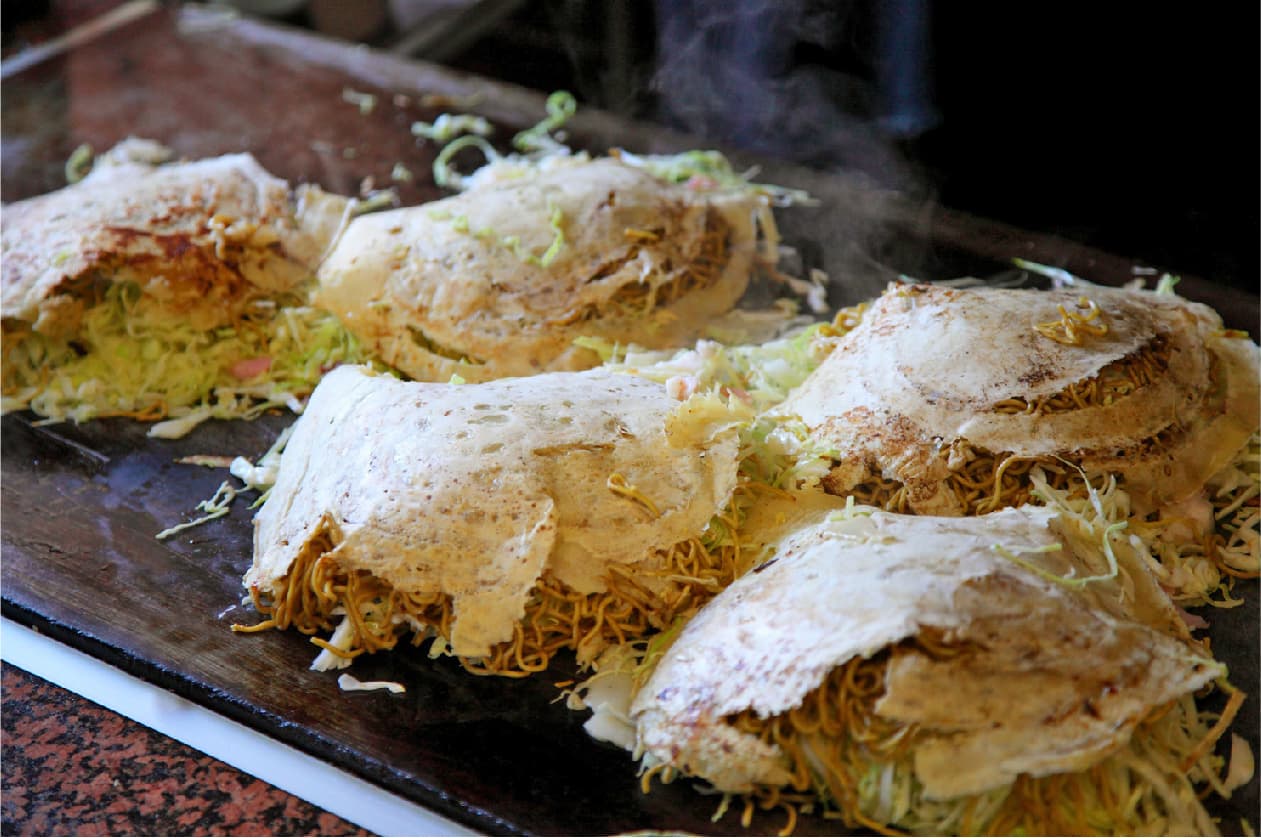 Soba or udon noodles are seasoned beforehand with sauces and spices like black pepper, then placed onto the batter. Each restaurant develops its own original and unique flavor by creatively blending different kinds of flours for the batter, or by being particular about preparing the perfect broth to mix in with the flour. This style of Mitsuhama-yaki—wherein the batter grilled like a crepe is topped with noodles–is called daitsuki.

Folded over into a half-moon shape! 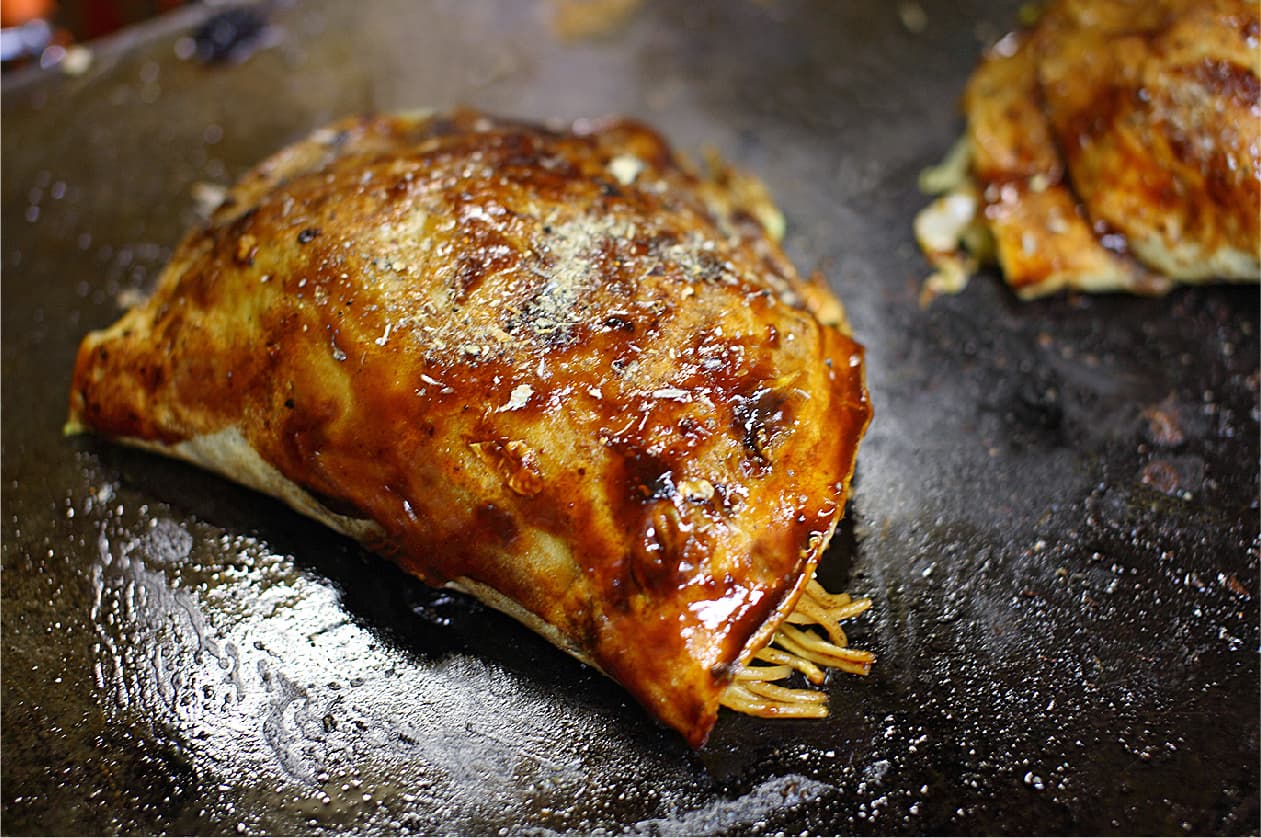 There are many theories about how the Mitsuhama-yaki ended up being shaped like a half-moon. Some say the batter was folded to make efficient spatial use of the small hotplates at the restaurants. Some say it was because customers often ordered take-out to eat at home, and so the restaurants would fold them in half to place them into containers. 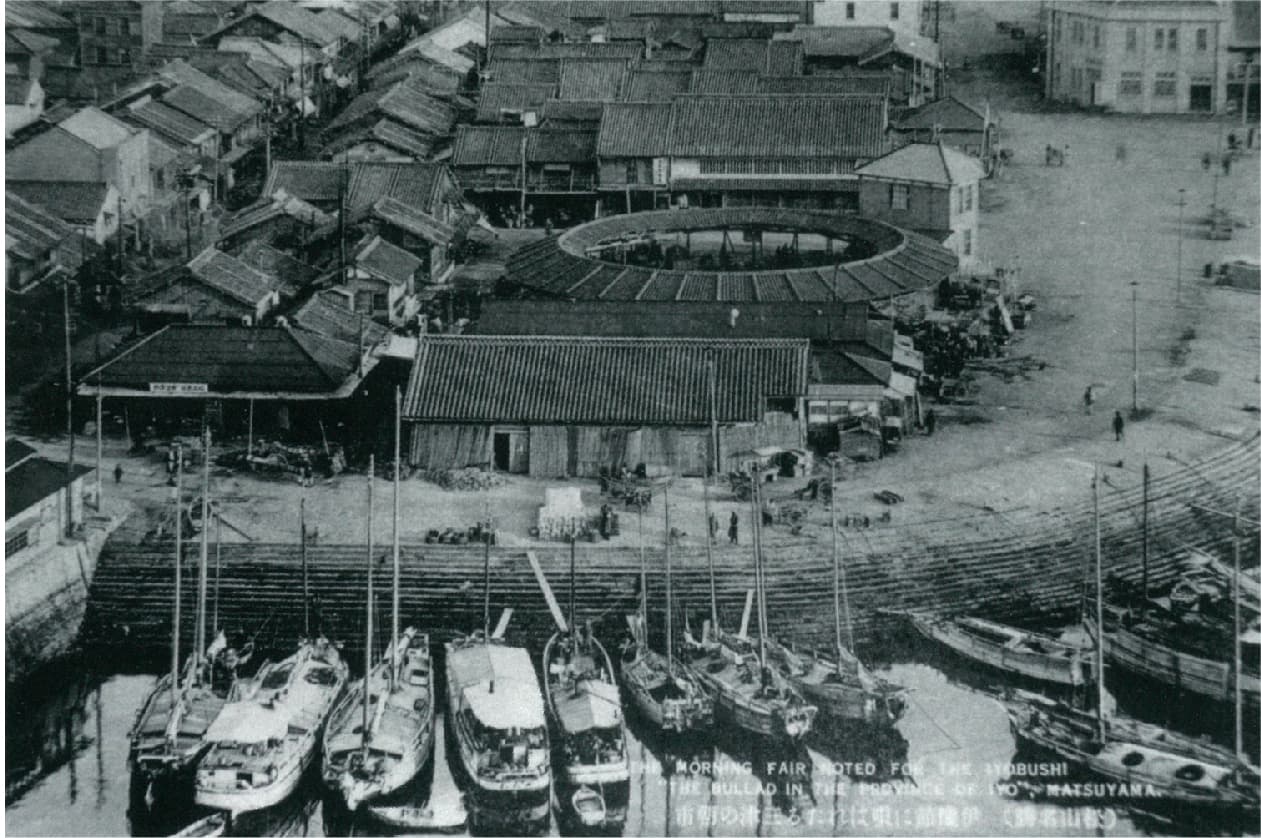 Mitsuhama-yaki is commoner’s food strongly rooted in the local region, and is said to trace way back to a dish called issen yōshoku (“western-style one sen (1/100 of a yen) food”) of over 100 years ago. A dish that was made by grilling a flour-and-water batter topped with green onions and such, and poured on top with Worcestershire sauce was sold as issen yōshoku. At the time, any dish flavored with Worcestershire sauce was considered “western,” and this view spread among the common people. This was the origin of the Mitsuhama-yaki. The practice of adding noodles to it started about 30 years ago. As delicious soy sauce was already being made in Mitsuhama, the style of adding noodles flavored with a sauce made with the local soy sauce gradually became the standard. 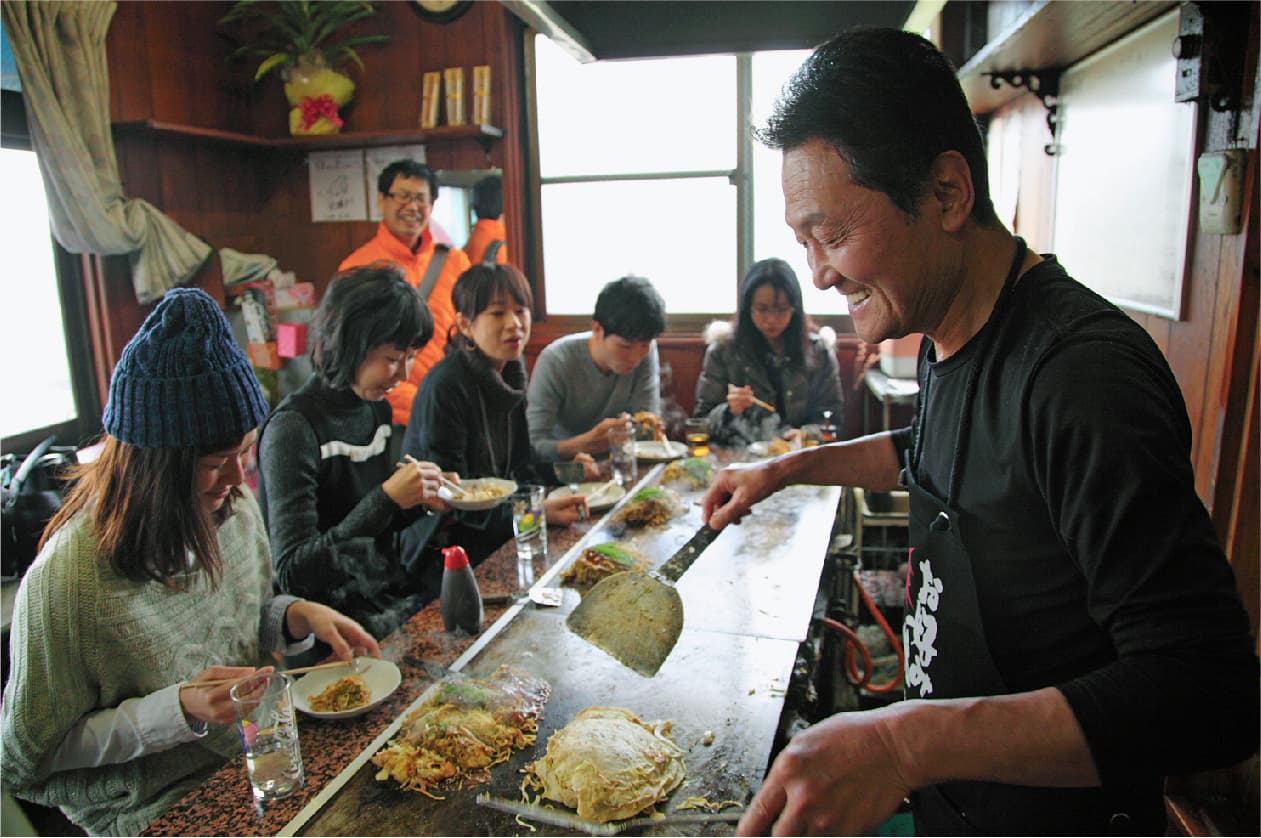 The sizzle of Matsuhama-yaki grilling on a hot plate and the delicious aroma of the sweet-and-savory sauce will whet anyone’s appetite. Eating the freshly-made piping-hot dish right off the hot plate using a spatula is how the well-versed Mitsuhama-yaki eaters do it. The Mitsuhama district is a port town with a long history. It is dotted with stores and restaurants that have existed since the olden days, and they can be found still standing on the off streets and in labyrinthine residential areas. We invite you to take off on a back-alley exploration. You will find Mitsuhama-yaki restaurants in many locations and have a chance to experience all the different versions of the delicious dish.